One of the best “before and after” transformations I have done for while.   This was a family piece so after decades of benign neglect (and after some serious initial neglect!) it came to me for some extreme restoration.  The veneer on the top and second level had had plants or vases placed upon it which had leaked into the veneer loosening it and causing it to subsequently flake off.  The inlay timber are a combination of rosewood, tulipwood, walnut, amboyna (for which I substituted burr totara, a really good match), birds-eye maple and of course ebony.  The substrate timber was poplar and mahogany and the legs were ebonized beech.  I always find it ironic that ebony is usually ebonized as it isn’t black enough! The bronze ormulu mounts were in exceptionally good condition with most of the original gold remaining on them, a soak in washing soda plus a good scrub prior to selective polishing and the  sealing with shellac was all they needed. The brass chain was also missing but I tracked down some ideal chain from a craft shop.

Quite a resurrection – the owners were astonished and delighted. They also suggested I change my name to “Amaze”. Hmmm perhaps I will… I’ve had “rockstar restorer” recently as well but you simply can’t beat “Living Treasure”  as I was once anointed by NZ House and Garden.

What is a jardiniere anyway?  It was used for displaying a potted plant.  The top of the lid lifts off and the plant placed in a tin liner underneath.

Audio:  As well as radio I listen to a great deal of audio books and podcasts while I work so I will be keeping a note of these as well.  Often if I see a photo of a piece I worked on I will recall the book I was listening to.  The title of this blog Resurrection Man comes from all the Dickens I have listened to in the last couple of years – specifically A Tale of Two Cities  in this case.  I am not digging up bodies but I do feel I breathe new life into things that will continue on in the world for hundreds of years.

For much of this job I listened to a book called Death of Artist by Kate Wilhelm a murder set in a small coastal Oregon town.  It was okay, a little slow and the reader had a  slightly annoying voice. I’d not come across Wilhelm before but was impressed to see that this is her most recent of dozens of books and she is now 83!  A nice coincidence was that it started in a woodworking workshop and featured descriptions of furniture and even tulipwood  which, of course I used in the restoration of this piece. 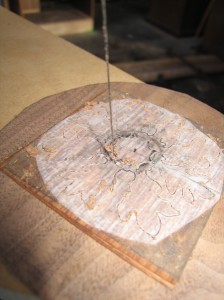 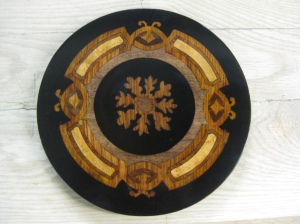